Here’s a rule of thumb for the horrible punishments of history. The more a crime threatened the person who actually made the laws, the greater, gorier and more terrible the retribution. Which leads us nicely to the infamous punishment of hanging, drawing and quartering, one of the most spectacularly gruesome and appalling methods of execution in Britain. It was used for anyone who was seen as having undermined the king’s authority to an untimely, painful and very very messy end. Although it became the official capital punishment for high treason in 1352, it was used in England for nearly six hundred years.

So, what does it mean when someone is hanged, drawn and quartered?

Gird your loins, and I’ll begin...

The ‘hanging’ part is as straightforward as anything in the whole process, the criminal would be suspended by the neck until partially asphyxiated – nearly dead, but not quite. This was a ‘short-drop’ – the traitor would be pushed from a cart or stool – to ensure that their neck wasn’t broken and that death wasn’t comparatively easy and painless.

Nobody seems to agree about the meaning of ‘drawn’, including people at the time. Sometimes it is taken to mean the practice of ‘drawing’ the prisoner to their place of execution behind a horse, through the jeering crowds – often feet-first, head-down on a wooden hurdle. After being hanged into semi-consciousness, he would be castrated, ending his bloodline and destroying his chance of having children (symbolically, of course, because he wasn’t likely to get many opportunities after that anyway). After this he was cut open from neck to groin, his intestines were pulled out and burned in front of him, followed by his vital organs. ‘Drawing’ could also refer to the fact that the traitor’s innards were ‘drawn’ from his body.

Following this, the corpse was beheaded and divided into four parts – sometimes, apparently, by the inventive method of scoring the body and tying it to four horses who galloped outwards and tore it apart. The pieces would be put on display in prominent places, such as the traitor’s home town, as a warning to anyone who might be thinking of having a go themselves.

The first nobleman to be hanged, drawn and quartered was the Welshman Dafydd ap Gruffydd, who upset Edward I by proclaiming himself Prince of Wales. Other famous victims include the Gunpowder Plotters and William Wallace of Braveheart fame, and it was particularly prevalent during the turbulent years of the English Reformation as a punishment for protesters and Catholic priests in the sixteenth century. 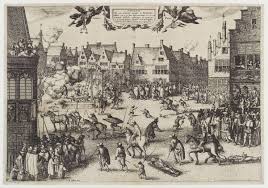 The Gunpowder Plotters, who were hung, drawn and quartered in January 1606

The last man to be hung drawn and quartered was a Scotsman named David Tyrie after being convicted as a French spy in 1782. His “head was severed from his body, his heart taken out and burnt, his privities cut off, and his body quartered”1 in front of at least 20 000 spectators, some of whom mobbed the scene as they fought over pieces of his body. Just over twenty years later, Edward Despard and six others were sentenced to be hanged drawn and quartered for plotting to assassinate George III in 1803, but they were ‘drawn’ around the yard on sledges behind a horse, before being merely hanged and then beheaded. By then, the faith in a good, bloodthirsty deterrent was waning, and reformers such as Sir Samuel Romilly and Jeremy Bentham campaigned against ‘barbarous’ punishments. Nevertheless, the practice wasn’t officially ended in Britain until the Forfeiture Act of 1870.

What were the aims of the punishment?

Hanging, drawing and quartering is an interesting (if pretty awful) punishment from the point of view that it fulfils a number of the aims of punishment. It was both horrendously painful and symbolic enough to represent serious retribution, or revenge, on the part of society and the king. It was spectacularly gory and messy and performed in front of crowds of thousands, so it appeared to be an effective deterrent. And, of course, it removed the criminal from society permanently. Of course, it wasn’t much good as a rehabilitative measure (an estimated 0% of victims went on to live better and more useful lives) but, hey, you can’t have everything.

It’s therefore useful for looking as the times when retribution and deterrence were important to society. Hanging, drawing and quartering was more common in times of social upheaval, anxiety and change, such as the Later Middle Ages or the English Reformation, when the monarch’s hold on power was shaky, the threats were great and the authorities really needed to get their point across. And, of course, it covers a large portion of the crime and punishment timeline of the last millennium in Britain, lasting from the thirteenth to the eighteenth century. So when it comes to answering the question ‘How has crime and punishment changed over time’, hanging, drawing and quartering can provide a few interesting
answers.

If very very messy ones.

Subscribe to our newsletter to get the latest news.